Leaving iReconcile and Moving to YNAB

The latest thing I’m into: a software called YNAB (You Need A Budget).

Previously I keep track of my budget with an iPhone app called iReconcile. I loved the app enough to pay a yearly subscription to get their online syncing service. That was two years ago.

But over the two years, I’ve been using the app I’ve been experiencing annoyances large and small. Sometimes the sync would corrupt my data and I would have to contact customer service to roll back my data. Which is okay, if they would only respond to my emails. I’m supposedly paying for this service after all. Lately, the app is starting to get bogged down with the sheer number of transactions and I had to clear out data before it starts moving again.

They had also advertised a web app to allow tracking and entering of data from your desktop. When I first got iReconcile this web service was next to useless and there hasn’t been any update since.

A few weeks ago I decided to email them directly to see if any updates to either the iOS or the web service were in the pipeline. No response.

That was also when my iOS app decided to cough on me again – most likely as a way of prompting me to delete old transactions (one at a time, mind you) again.

That was the end of it for me; I didn’t see the need to keep paying for non-existent customer service for an ageing app.

It is everything iReconcile is supposed to be but wasn’t.

YNAB (You Need A Budget) is a desktop budgeting system with an iOS/Android app to facilitate tracking.

I love doing the actual budgeting on the desktop instead of fiddling with the mobile apps. Some people might want more functionality on the iOS app (the Boy certainly does, but then he’s resistant to any changes – it took months for me to get him used to iReconcile), but I highly recommend giving the system a go anyway. Being able to use the number pad on my physical keyboard just make the whole budgeting process so much quicker.

A word of note, YNAB is not like Mint.com, it doesn’t pull your transaction from your bank automatically, you have to enter your expenditure manually. I’ve been doing that with iReconcile, so this is not an issue for me, but it might be for others.

The desktop version does have an importing feature though, which allows you to manually import your transaction history (OFX file) from your bank.

This is great for finding those transactions that might have slipped the gaps and is great when you’re reconciling your accounts. 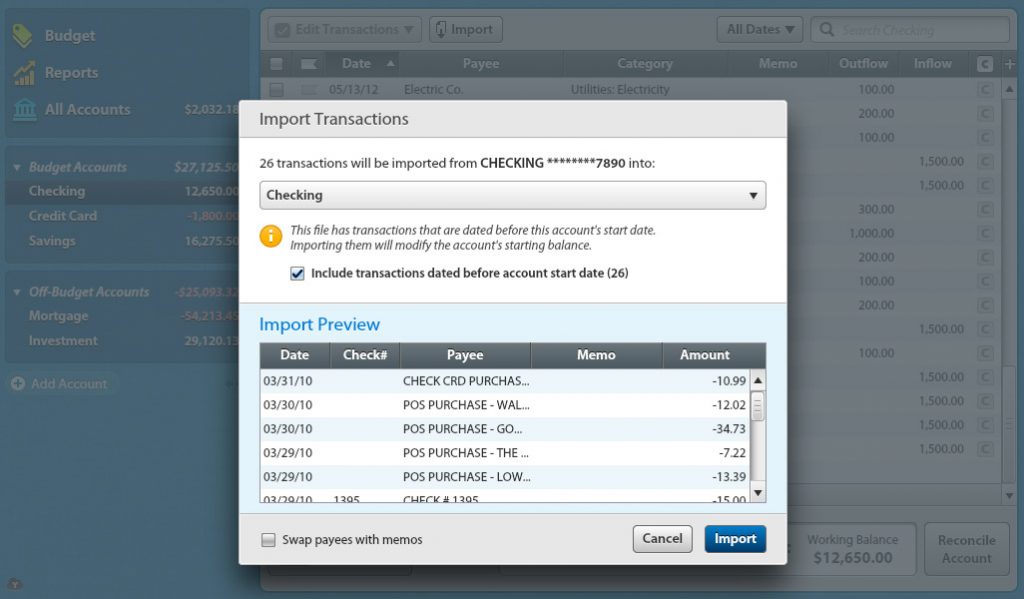 Now, what about the mobile apps?  Let me say this up front, in the YNAB system, the mobile app is used only for tracking your daily income and expenses (and your bank transfers, eg. ATM withdrawals). You can’t change your budget, and you can’t look at your reports.

But realistically, why would you want to? 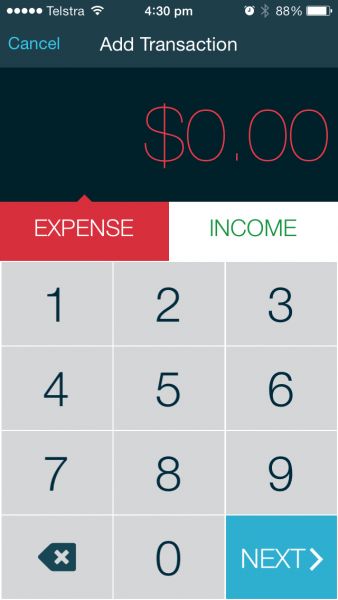 The YNAB system is built around budgeting by categories instead of by accounts, which is how I’ve always budgeted but never had a system which supported it. iReconcile kind of did it, but when the budget page takes ages to load, you’re just not going to use it. 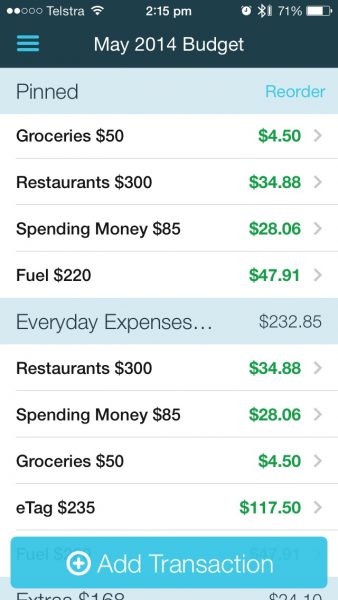 Both the desktop and mobile apps are really slick to use and pretty to look at. It uses Dropbox to sync the data between devices, and I haven’t any issues with conflicting versions of information being synced.

It’s a one-off payment of $60 for the desktop app (the mobile apps are free, but you must have the desktop app for them to work), and this one license allows you to share the software between everyone in your immediate family.

One thing I must mention is that YNAB also has a very substantial database of support filesand a comprehensive series of live classes teaching people how to budget and use the YNAB program properly. Even if you don’t buy the YNAB software, you should still go through those videos and articles; they are just chock full of tips on how to budget better.

Before I sign off, I want to point out a couple of review articles I would highly recommend reading if you want to know more about the YNAB software. I really love the apps but have only skimmed the surface of the features available. These blogs have done a fantastic job walking through each part of the program:

Do you budget? Are you using a budgeting program? Are you an iReconcile or YNAB user? Comment below on your budgeting experiences, I would love to know.